There’s a murky continuum between micromanagement and being “hands off.” In the classroom and as part of a school community, I have experienced both extremes and felt alternately stifled and abandoned. I wanted to ensure my staff wouldn’t feel that way about my leadership, but it took time and reflection to find the empowerment sweet spot.

One conversation with a seventeen year-old junior counselor gave me the insight I needed to define my leadership styles. The counselor had a child in his group whose behavior was causing nearly constant disruptions. It seemed natural for me to take action to address the problem head-on, but when I offered to talk to the camper, my staffer flinched. His reaction surprised and worried me. When I asked him what was wrong, he explained, “The kids know you’re in charge–and they’ll listen to you, but why should they listen to me if they don’t think I’m in charge, too.” He helped me see what I already knew about good leaders. I had to learn to pick my moments and support my staff without swooping in and “fixing” things for them. Just because I knew how to approach the problem didn’t mean it was best for me to take control away from someone who needed to learn.

I left that conversation with a perspective I’d been lacking. In the high-pressure, now moments of camp, I would focus on the problem before me. Like an emergency room doctor, I often handled conflicting needs in triage: scraped knees, lost shoes, borrowed towels, “fairness” arguments, bee stings, and homesickness. These were the frenetic moments where I felt hard pressed to be in three or more places at once, and it’s exhausting to be “the decider.”

I knew I had to empower my staff to make decisions and handle problems without always having to consult me first. It’s inefficient for them and for me if they rely too much on me to tell them what I think they should do next. I knew I wouldn’t be an effective leader if every choice had to go through me first. I knew I had to model the type of leader I needed my staff to be and to give them the right amount of support at the right times. 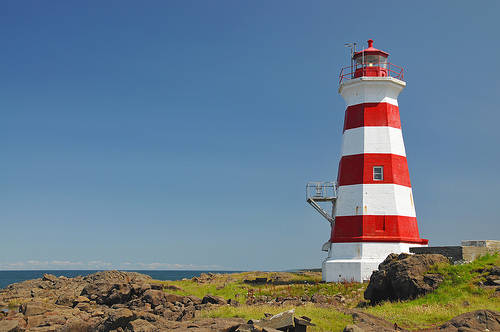 In essence, I understood that sometimes I’m Air Traffic Control, fielding questions and making decisions because there’s no time to waste. It’s good for me to make certain choices or to establish expectations because no matter what: some problems won’t solve themselves. At other times as I walk through the camp grounds, I’m more like a lighthouse. My staff knows I’m there if they need me and it’s my responsibility to model strong leadership and show them I have confidence in them, too.

In reflecting on these two roles, I’ve thought about the leaders who have guided me and leaders who have frustrated me. The ones who have helped me grow were the ones who didn’t try to solve problems for me, but allowed me to develop my capacity. As I shifted my role from leading from the front to leading on the side, I watched as my young staff stepped in and stepped up to the challenge, going beyond even their own expectations.

1 thought on “Air Traffic Control or The Lighthouse”